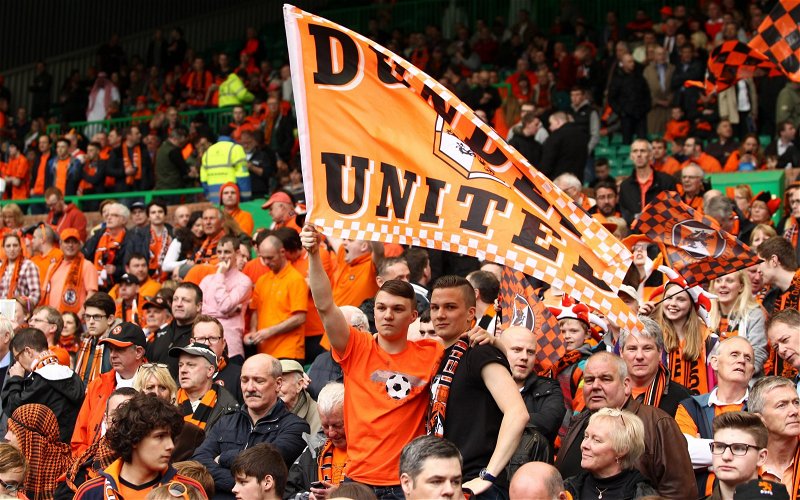 Dundee United moved back into the play-offs after a long overdue 2-0 victory against lowly Dumbarton at Tannadice.

Both goals arrived before the interval with Paul McMullan putting the hosts in front and newcomer Bilel Mohsni on target for the second successive game.

The Tangerines therefore leapfrog recent opponents Greenock Morton in the table, and are now six points behind second-placed Livingston, who were simultaneously losing 1-0 at fellow challengers Dunfermline Athletic, with still a game in hand.

However, United should really have had more goals, with Sam Stanton shooting wide early on before McMullan also narrowly missed.

On loan goalkeeper Harry Lewis then hurriedly advanced to meet the threat of Callum Gallagher, while Dimitrios Froxylias also dragged wide for the visitors – that after Scott McDonald had already been charged down.

But it was McDonald’s through ball allowing McMullan to make the breakthrough with a low finish on the half-hour; although Gallagher then drove directly at Lewis, who also thwarted David Wilson on the counter after opposite number Scott Gallacher had claimed from McDonald.

Billy King was similarly kept out by the visitors’ keeper, until Mohsni stabbed in McMullan’s cross to double the advantage in first-half added time.

Goalscorer McMullan soon challenged Gallacher from distance after the break and McDonald also cleared the target.

Meanwhile, Stanton missed in front of an inviting goal following a neat exchange before King’s deflected effort almost found its way in.

Home striker McDonald later fired a further attempt wide, with the busy Gallacher frustrating both King and substitute Craig Slater before McMullan lifted yet another shot over close to the end.